Software Design Patterns help accelerate the development process by providing a reusable blueprint for your code to solve a particular problem. We follow Design Patterns to write generalized, reusable, and readable code that could be easily understood by others familiar with the patterns we’ve applied.

There are different classifications of design patterns depending on which class of problems they solve – among which the Observer Design Pattern belongs to the Behavioral Pattern class.

This class of patterns determines how objects communicate with each other. In this guide, you will learn everything you need to know about the Observer Design Pattern and understand how we can use it to solve certain problems efficiently.

The Observer Design Pattern deals with One-to-Many relationships and utilizes events to let subscribed entities know about changes in an observable. 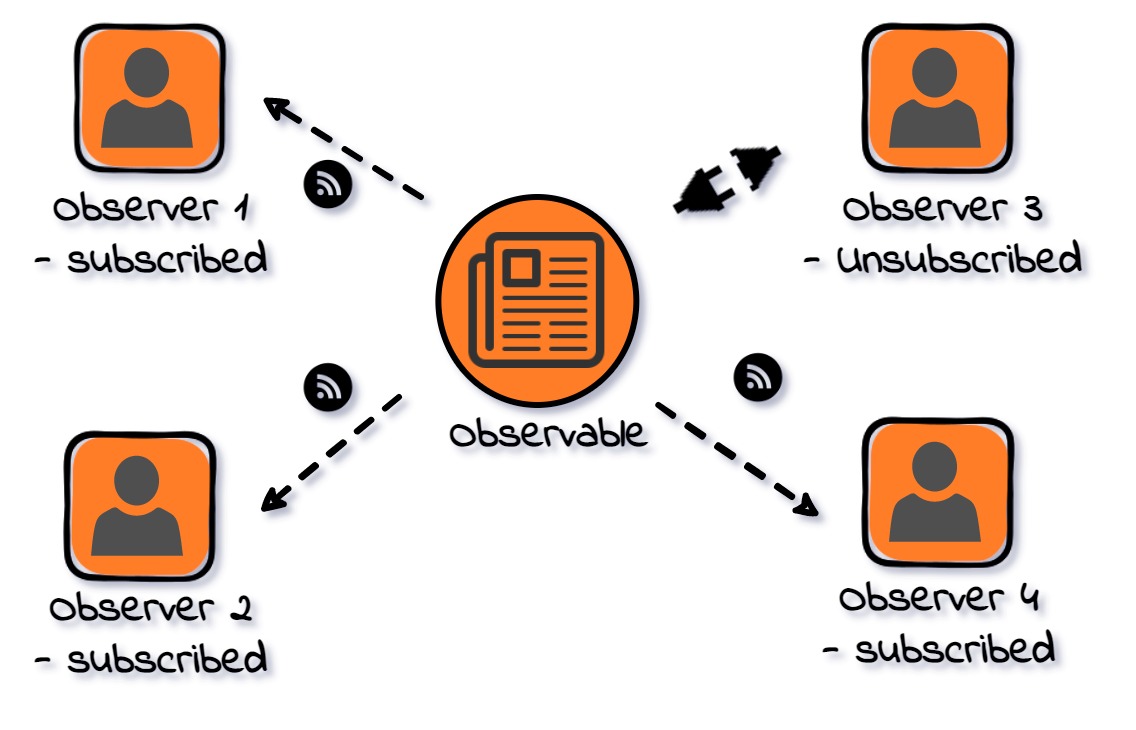 This functionality has many implications and implementations, and similar functionality is all around you. It’s an extremely simple, yet very effective and wide-spread pattern.

A similar implementation of this design pattern is seen in generating feeds on your social platforms – the Pub/Sub (Publisher/Subscriber) Model/Pattern. When a content publisher publishes their posts, the subscribers get notified of the content. A similar analogy may be people looking out for a flare signal or a firework for a certain event, and reacting (or not) depending on their specific roles.

Does that mean that the Observer Design Pattern and Publish/Subscribe Pattern are the same?

Previously, both patterns were synonymous. Nowadays, each pattern has distinct traits that make them two separate patterns.

The following are the major differences between the Observer Pattern and the Pub/Sub Pattern:

One of the best ways to get a feel for this pattern is to implement it, let’s implement it in Python!

A basic implementation requires two classes – an Observable and an Observer. The Observer class is initialized with an object as an argument. The object is none other than an Observable to keep track of, to which it is subscribed upon creation.

The class also has a notify() function which triggers a reaction and acknowledges the receival of a notification/event from the observable:

The Observable class is initialized with an empty list to hold the Observer instances. It also has functions such as subscribe() to add an observer, notify_observers() to call the notify() function on each observer, and unsubscribe() to remove the observer from the list:

Plugging in all of the above-mentioned components, let’s write some code that sets up an observer and observable and sends messages, which triggers a reaction:

Notice that we also unsubscribe an observer before publishing the second message. This will lead to the message being printed only once instead of twice on the second attempt, as it is received by only one subscriber.

Running this code will result in:

With the implementation in place, the pros and cons of this design pattern can be compared as follows:

To mitigate most of the cons, a message queue was introduced in between the observer and the observable to overcome all these problems, which led to devising the Pub/Sub pattern – a variation of the Observer Pattern.

This guide covered the the Observer Pattern, how it can be implemented, and compares its pros and cons.

It’s interesting to note that the Observer Pattern is one of the Behavioral Patterns that has led to many of the features we use today, such as RSS feeds, social media feeds, etc.

Is it worth the money? When to buy products for your job