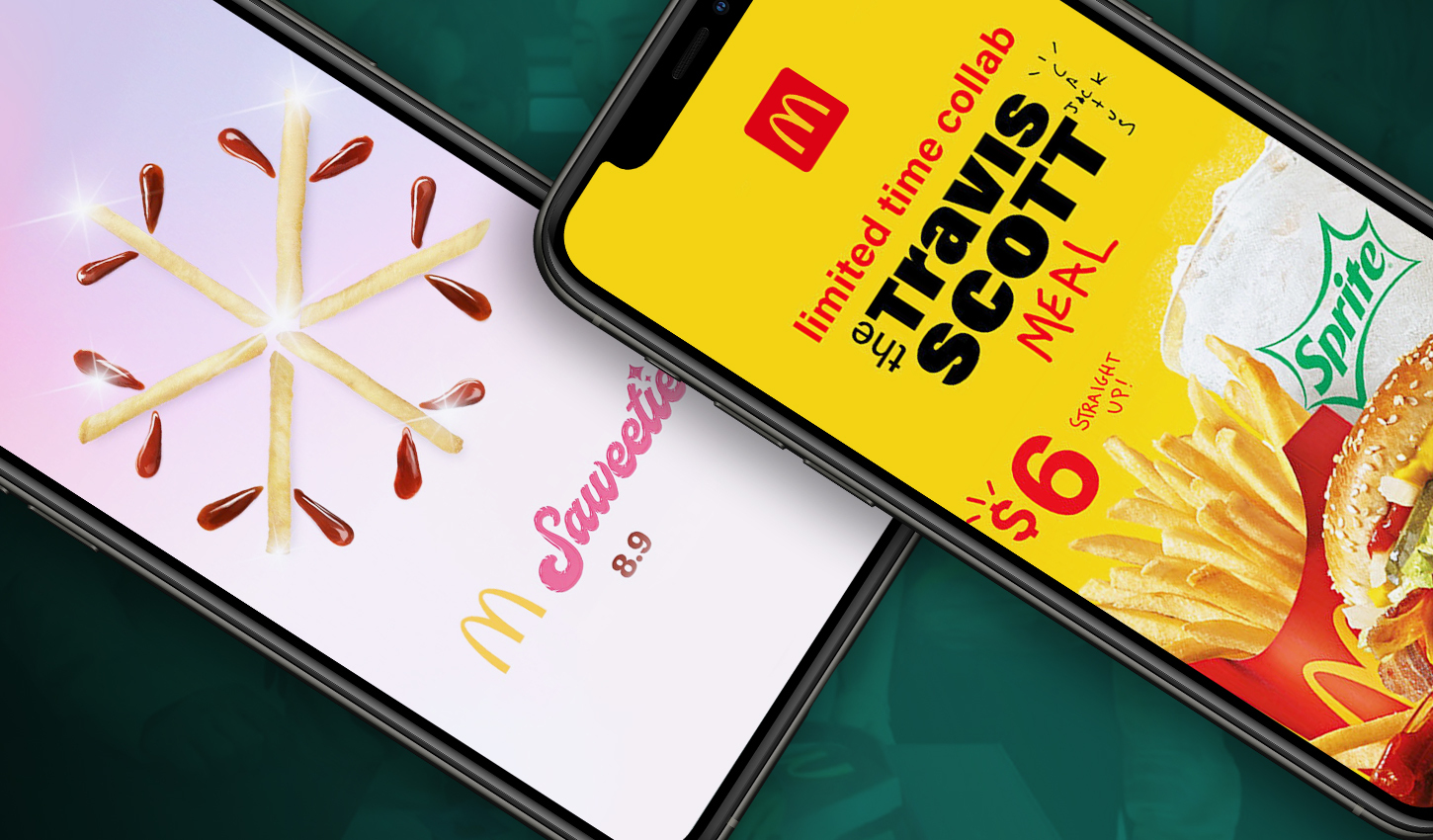 Fast food giant McDonald’s is going all-in on high-profile collaborations. After decades without celebrity endorsements, the global chain released the Travis Scott Meal in September of 2020 for a month-long run. The event was quickly followed by a meal tied to Colombian reggaeton artist J Balvin from October to November 2020.

After a break, McDonald’s returned to the tie-in promotion in May of this year, as the company collaborated with mega-popular K-Pop boy band BTS to release a branded meal to much fanfare. Now, McDonald’s has already announced another celebrity endorsement, this time from American rap star Saweetie.

McDonald’s is clearly committed to this new promotional strategy, investing in digital campaigns to drive interest, but what are the returns?

Let’s take a look at data from the Sensor Tower and Pathmatics platforms to break down how McDonald’s has developed paid campaigns for these collaborations, and the net result it has had on the company’s mobile app in the United States.

McDonald’s introduced its first collaboration, the Travis Scott Meal, on September 4, 2020, and immediately began a cross-device digital campaign to market the meal up to its final on October 8 of last year. According to Pathmatics Explorer data, the fast food chain spent more than $6.8 million on digital and social advertising during the period the meal was available in stores—a million more than was spent during the month prior—with nearly two-thirds of that spend devoted to desktop video.

Pathmatics data also shows that the top-performing video creative at the time was a 15-second YouTube ad segment that highlighted a stop-motion figure version of Scott enjoying his namesake meal. That creative, which ran from the meal’s launch until September 22, generated more than 15 million impressions in the U.S.—more than triple a comparable ad segment with similar spend performed the month prior. However, the ad segment did not make any explicit mention of the McDonald’s app, and driving users to the app was not the focus of the campaign. 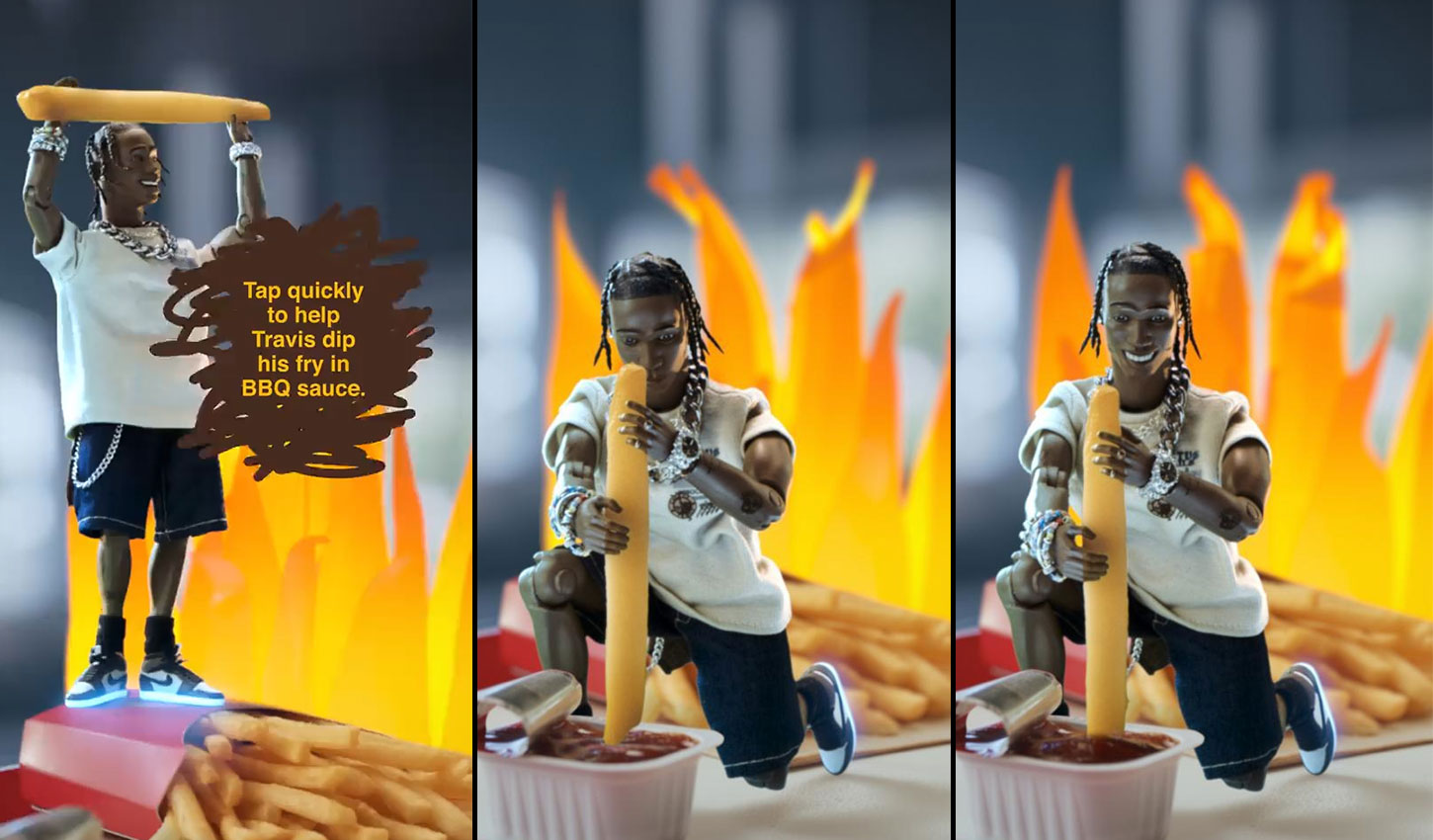 Another focus at the time was Snapchat, which is home to a high concentration of Gen Z users who were likely to engage with the McDonald’s campaign due to its focus on Scott. According to Sensor Tower data, the top creative by impressions on the app also utilized Scott’s action figure miniature, encouraging users to click through to help him dunk his fries into BBQ sauce. This creative accounted for 10 percent share of voice on the network for a 24-day period starting on September 10, with related follow-up ads reaching around 5 percent for the same period. Like the YouTube ad segment, this campaign didn’t actively promote the McDonald’s app. Rather, it ran alongside a separate active ad campaign that offered a free menu item upon download of the app.

Although there was not much active digital promotion to drive users to mobile, there was still a noticeable lift in installs of the McDonald’s app during the time the meal was available.
According to Sensor Tower Store Intelligence data, U.S. installs increased by 11 percent in the first seven days of the promotion compared to the prior week. Additionally, Sensor Tower Usage Intelligence points to even higher growth in terms of daily active users (DAU) at 17 percent over the same period.

Before the Travis Scott Meal promotion ended, McDonald’s promoted the J Balvin meal from October 5 to November 1, 2020, spending more than $9 million during that period—50 percent more than the Travis Scott promotion—according to Pathmatics data. But this meal included a particularly important incentive to order through mobile: if ordered through the McDonald’s app, the Oreo McFlurry that came with the meal would be free.

Both of the top YouTube ad segments associated with the J Balvin meal did mention the free item available through purchases made via the app. Interestingly, McDonald’s chose to promote most heavily to the artist’s Spanish-speaking audience, and both of the most effective creatives on YouTube were almost entirely in Spanish. Both ad segments saw approximately 20 million impressions each—five million more than the top Travis Scott Meal creative—according to Pathmatics data.

This promotional period also had a Snapchat component, similar to what was seen with the Travis Scott Meal. However, once again, the ad focused more clearly on the free Oreo McFlurry that was available via ordering through the app. According to Sensor Tower data, the three-snap series had averaged about 15.2 percent in SOV for the time it ran.

Unfortunately, even with more concentrated promotion, daily installs of the McDonald’s app in the U.S. averaged about 46,000 during the promotional period, or about 85 percent of the Travis Scott Meal’s average daily downloads. However, the relatively lackluster response wasn’t necessarily due to ineffective promotion: news reports noted that McDonald’s famously broken McFlurry machines made it nearly impossible to order through the app, and a coinciding campaign that promoted the J Balvin Meal through McDelivery—McDonald’s partnership with food delivery services such as UberEats, DoorDash, and Postmates—may have redirected users from downloading the McDonald’s app proper in favor with already familiar food delivery apps.

It’s also worth noting that despite these struggles, both installs and DAU remained well above the levels seen in August 2020. Average U.S. DAU during the J Balvin promotion were up 23 percent compared to August 2020, nearly matching the 26 percent growth in average DAU seen during the Travis Scott promotion compared to the same month.

McDonald’s returned to the world of collaborations with the popular pop group BTS, running the BTS Meal from May 26 to June 20, 2021 in the United States. According to Pathmatics data, the fast food chain spent more than $10 million during the period the meal was available, more than a million greater than their campaign for J Balvin. Although the spend on desktop video was much less during this period—encompassing just 18 percent of the brand’s overall media mix—the popularity of BTS led to incredible ad lifts.

For example, the 15-second YouTube ad segment, which proved to be effective across all of the campaigns that McDonald’s ran, netted nearly 40 million impressions during the period it was run, according to Pathmatics data. That’s nearly double any single ad segment released for the two previous campaigns. Additionally, McDonald’s saw traction with a static desktop ad targeted towards the popular websites within K-Pop fandom, including Soompi, AllKPop, and Viki by Rakuten. That static ad generated more than 33 million impressions with $90,000 spend, according to Pathmatics data. These ads pushed users to order the BTS Meal through the McDonald’s app, similar to the way the J Balvin Meal had. 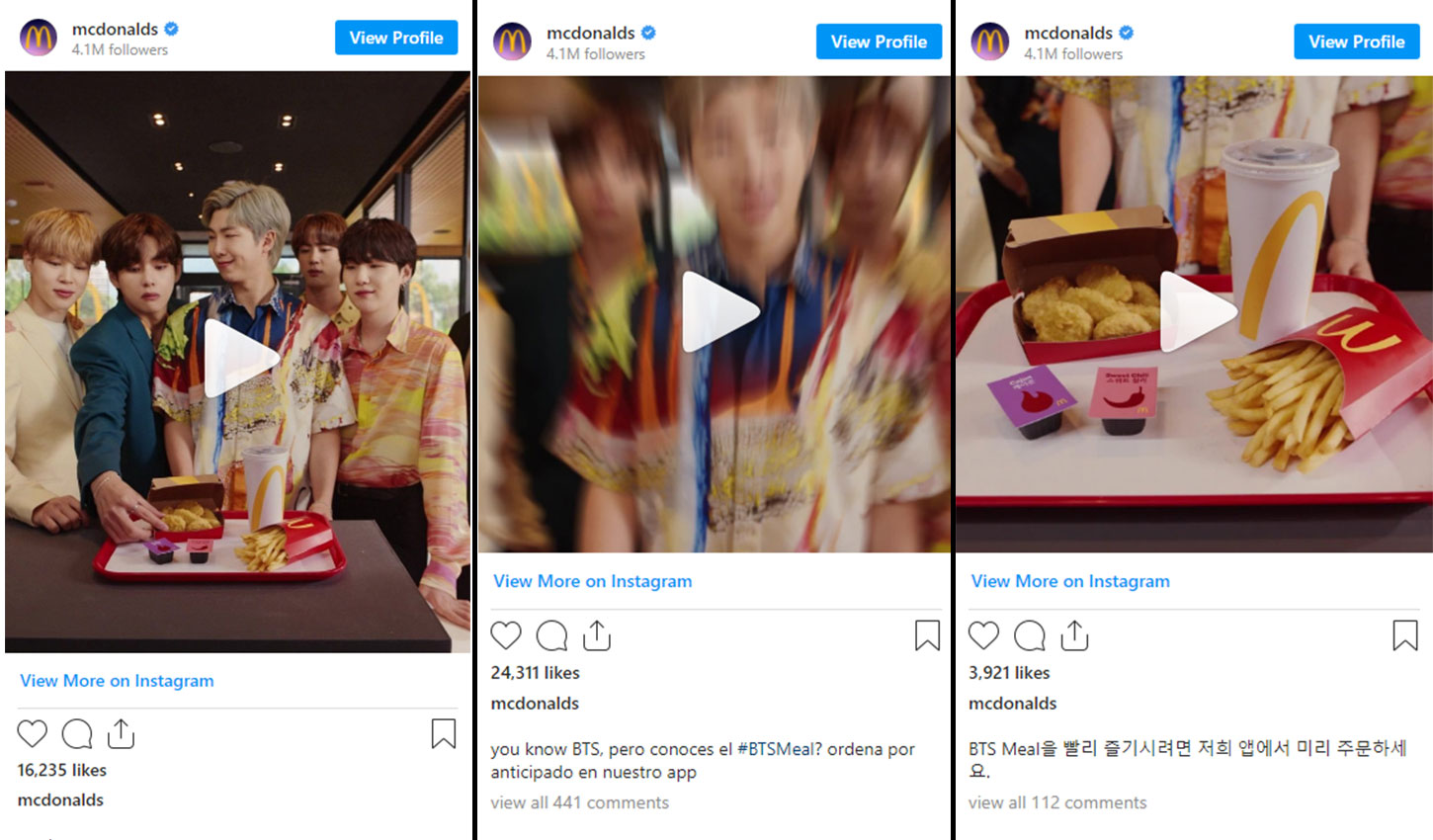 Another big difference for the BTS campaign was the lack of group-centered promotion on Snapchat. According to Sensor Tower data, McDonald’s elected against releasing any special BTS app install ads during the period the meal was active. Instead, the company seemed to have explored Instagram: According to Pathmatics data, McDonald’s allocated 12 percent of spending share to Instagram during the length of the BTS meal promotion (compared to no spend at all during the Travis Scott meal promotion), suggesting a strategy shift to get even closer to BTS’s core audience.

The McDonald’s app saw even higher U.S. install growth in the first week of the BTS Meal promotion than it did during the Travis Scott Meal, with 23 percent growth week-over-week. Average U.S. DAU also grew by a healthy 12 percent W/W, and was 20 percent greater than the first week of the Travis Scott Meal. Buzz for the collaboration, which coincided with the group’s release of their new hit single “Butter” proved to draw the attention of the exceptionally tuned-in K-Pop fandom.

After all of the collaborations, how has McDonald’s fared? According to the public earnings statements from the time they were launched (Q3 2020 and Q2 2021), the fast food giant seems pleased with its investment. According to the Associated Press, McDonald’s reported an in-store sales increase of 2.2 percent during Q3 2020—at a time when most in-store sales for fast-food chains were declining—as well as a better-than-expected earnings of $2.22 per share.

The company credited the BTS collaboration with producing similarly effective results. According to CNBC, U.S. same-store sales climbed nearly 25.9 percent in the quarter and 14.9 on a two-year basis, driven by the power of the BTS meal alongside new menu items like the chicken sandwich. This contributed to earnings that beat Wall Street once again, landing at $2.95 per share.

McDonald’s seems committed to continuing its celebrity endorsements, as the Saweetie Meal launched this week on August 9 alongside yet another app-driven promotion. As the company focuses on leveraging these endorsements to promote its app, it may continue to see the recipe for in-store success.

Just How Optimized Can Your Life Be?

The Car Key of the Future (Is Still in Your Pocket)