This tutorial outlines object oriented programming (OOP) in Python with examples. It is a step by step guide which was designed for people who have no programming experience. Object Oriented Programming is popular and available in other programming languages besides Python which are Java, C++, PHP.

What is Object Oriented Programming?

In object-oriented programming (OOP), you have the flexibility to represent real-world objects like car, animal, person, ATM etc. in your code. In simple words, an object is something that possess some characteristics and can perform certain functions. For example, car is an object and can perform functions like start, stop, drive and brake. These are the function of a car. And the characteristics are color of car, mileage, maximum speed, model year etc.

In the above example, car is an object. Functions are called methods in OOP world. Characteristics are attributes (properties). Technically attributes are variables or values related to the state of the object whereas methods are functions which have an effect on the attributes of the object.

In Python, everything is an object. Strings, Integers, Float, lists, dictionaries, functions, modules etc are all objects. 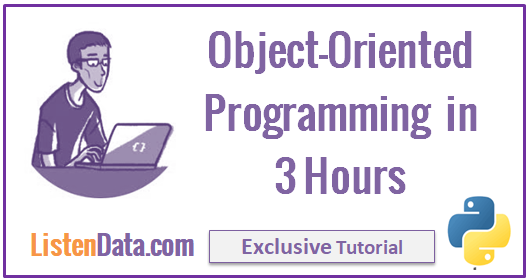 It’s one of the most common question data scientists have before learning OOP. When it comes to data manipulation and machine learning using Python, it is generally advised to study pandas, numpy, matplotlib, scikit-learn libraries. These libraries were written by experienced python developers to automate or simplify most of tasks related to data science. All these libraries depend on OOP and its concepts. For example, you are building a regression model using scikit-learn library. You first have to declare your model as an object and then you use a fit method. Without knowing fundamentals of OOP, you would not be able to understand why you write the code in this manner.

In python, there are mainly 3 programming styles which are Object-Oriented Programming, Functional Programming and Procedural Programming. In simple words, there are 3 different ways to solve the problem in Python. Functional programming is most popular among data scientists as it has performance advantage. OOP is useful when you work with large codebases and code maintainability is very important.

Conclusion : It’s good to learn fundamentals of OOP so that you understand what’s going behind the libraries you use. If you aim to be a great python developer and want to build Python library, you need to learn OOP (Must!). At the same time there are many data scientists who are unaware of OOP concepts and still excel in their job.

In this section, we will see concepts related to OOP in Python in detail.

Class is a architecture of the object. It is a proper description of the attributes and methods of a class. For example, design of a car of same type is a class. You can create many objects from a class. Like you can make many cars of the same type from a design of car. 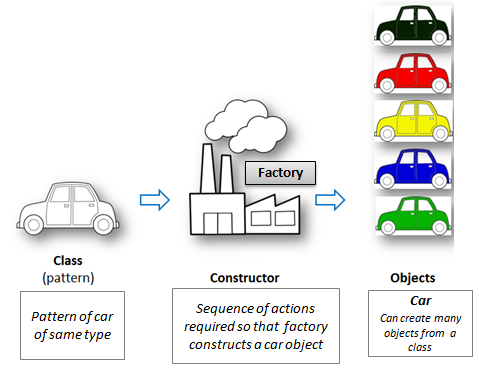 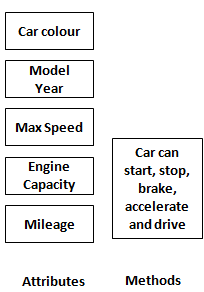 There are many real-world examples of classes as explained below –

In python, we can create a class using the keyword class. Method of class can be defined by keyword def. It is similar to a normal function but it is defined within a class and is a function of class. The first parameter in the definition of a method is always self and method is called without the parameter self.

To submit methods, we need to use rounded brackets.

In the example below, we are creating a class called company. Here attributes are name, turnover, revenue and number of employees working in the company. Method is revenue generated per employee (let’s call it productivity for demonstration purpose).

Attributes which are defined outside of method can be extracted without creating object.

Constructor is a special method. You can think of as a function which initializes or activates the attributes or properties of the class for a object. Use keyword __init__ to create a method for constructor. In the above section we discussed an example of car as an object. You can think of constructor as entire sequence of actions required so that the factory constructs a car object out of the class design pattern. self represents that object which inherits those properties.

Objects are instances of a class. Words ‘instance’ and ‘object’ are used interchangeably. The process of creating an object of a class is called instantiation.

In the following example, we are asking user to input values. __init__ is called when ever an object of the class is constructed.

We have created myname object of person class.

Let’s take another example. Here, the program below returns output based on the method defined in class

How to get revenue variable from MyCompany class?

MyCompany.revenue returns error as it cannot be accessed because object has not been created.

In python, there are three types of methods which are Instance, Class and Static.

How Instance and class methods are different?

Instance method can access properties unique to a object or instance. Whereas Class method is used when you want to access a property of a class, and not the property of a specific instance of that class. The other difference in terms of writing style is that Instance method take self as a first parameter whereas Class method takes cls as a first parameter.

In the example below, we are creating class for cab. Both Cab and taxi means the same thing. Attributes or properties of cab is driver name, number of kilometers run by a cab, Pick-up and drop location, cab fare and number of passengers boarded cab.

Here we are creating 3 methods : rateperkm, noofcabs, avgnoofpassengers. First one is instance method and other two are class methods.

Static method is the least popular method among all the three methods. Unlike instance and class methods, static method does not take a special keyword (self, cls) as a first parameter. It has a limited use because Neither you can access to the properties of an instance (object) of a class NOR you can access to the attributes of the class. The only usage is it can be called without an object. It is mainly useful for creating helper or utility functions like validation of driver name (driver name must be less than 32 characters) or bill amount must be more than zero (can’t be negative or zero). See the program below for the same task.

In this example, we have two classes Cab and Bus which have many attributes which are similar but there are a few which are unique to class. To solve this, we have created a parent class named Vehicle which contains common attributes and method. 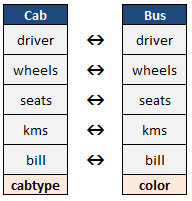 Polymorphism means the ability to take various forms. It is an important concept when you deal with child and parent class. Polymorphism in python is applied through method overriding and method overloading.

As you can see the output shown above, children classes override the parent class method.

It is used to produce readable representation of the object.

Encapsulation of Data means restricting access to methods and variables. This can prevent the data from being modified by accident (mistake).

In the above program, type is a public attribute and bhk is a private attribute which can’t be accessed outside class.

Here we are updating driver’s first name but it does not have an impact on email address which is a combination of first and last name.

First name has been changed from Sandy to Tom but Email address remains same. Okay, the obvious question arises “how to update email address as well?”. With the use of @property decorator we can change the behavior of email. email(self) is a method but it operates like a normal property. This special method is called Getters and Setters

In real world, getters & setters are mainly used for including validation logic. In the example below, we are creating donation class with amount attribute. Amount must lie between 10 and 1,000,000. If user enters less than 10, it should be set as 10. Similarly, if user tries to enter a value greater than 1 million, it should be capped to 1 million only.

How to import class

In this section, we will cover how to load class from different file or directory.

To avoid writing module name to access class, you can use “from” which loads module into the current namespace.

To test this, save and run the following script from terminal as well as accessing it using import command.

How to change directory in command prompt

Type cd followed by space and then folder name. Once right directory is set, you can enter name of your python script file. See the snapshot below.

Create class Rectangle which has attributes length and width. Create 2 methods for calculating area of rectangle and perimeter of rectangle. Area is calculated by multiplying length by width. Perimeter is 2 times of (length + width). Solve and post your solution in the comment box.

After completion of this tutorial, you must have got a good idea of important topics of object oriented programming used in Python. Your next step should be practice the concepts you have learnt. Try to use it in your live projects.

How To Convert Python String To Array

invalid literal for int() with base 10 – Finxter