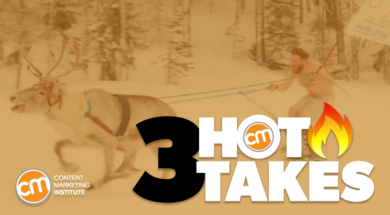 A town in the Arctic Circle launches an Olympic bid it hopes it won’t win. The North Face aims to melt hearts with stories of outdoor adventures. And Lonely Planet helps travelers plan health-conscious visits to favorite hotspots.

The Arctic Circle is a cold place.

The well-done bid included all the elements required for an Olympic bid. The agency behind the bid produced a video showing residents doing traditional summer sports (like volleyball and swimming) in the snow-covered outdoors. It held a design competition for the Salla 2032 logo and official poster. They created a website for the bid complete with a cute mascot – a reindeer named Kesä (the Finnish word for summer) dancing in digital celebration – and sold merchandise.

Salla’s mayor even traveled to Olympic headquarters in Lausanne, Switzerland, to deliver the bid book.

But when he held the announcement press conference, he revealed the real reason behind the bid – it was ”a contestation of climate change.” Suddenly, #Salla2032 became #SaveSalla and #SaveThePlanet.

There were hints in the Olympic bid campaign: The video included residents wearing summer garb sitting in lawn chairs in the snow with the voiceover: “Warm heart, we have it. Warm place coming soon.”

In the weeks after the reveal, conversations around global warming on social media increased 879%. The campaign earned 7.8 billion media impressions, including 1,237 news items in 118 countries, or $157 million of earned media. Salla was the most mentioned city on Twitter for three weeks after the announcement. And the campaign recently earned a 2021 Clio Award for the Sao-Paulo-based advertising agency Africa that created it on behalf of the tourist bureau, House of Lapland.

WHY IT’S HOT: The campaign used the unexpected – a bid for the Summer Olympics – to attract attention. Then, it turned that attention to the real message – global warming and climate change. The “clickbait” worked. The unlikeliness of the bid intrigued people. They doubted its success, but they still wanted to know the rest of the story. Why would this town go to so much effort for something they knew didn’t have a snowball’s chance in hell of succeeding?

The reveal traded the bid story for the climate change story, showing the power of the unexpected to move audiences. But don’t misunderstand the lesson. If you’re going to try a clickbait-and-switch approach, make sure you do it so well that your audience feels delighted after the reveal.

HANDPICKED RELATED CONTENT: Is Clickbait Ever Used for Good?

Many companies sell jackets to keep people warm in cold weather. But The North Face takes it a step further with its new “It’s More Than A Jacket” content campaign.

The company is asking climbers all over the world to submit stories and images of their well-loved North Face products to be considered for a crowdsourced digital archive. The goal is to celebrate memories and stories of adventure from the brand’s 55-plus-year history.

In The North Face announcement, Mike Ferris, vice president of global brand management, said: “Our customers, the feats they have achieved, and the memories they have created are such a big part of our brand’s rich DNA. With this archive, we are memorializing the people, products,  and stories that continue to inspire our community and move the world forward.”

The North Face is working with artists RZA and HAIM as well as its athlete team members Conrad Anker and Ingrid Backstrom to write their stories of adventure into the brand’s history. Later, they will debut three films featuring adaptive athlete Vasu Sojitra, freestyle skier Jossi Wells, and Will Steger, leader of the 1990 International Trans-Antarctica Expedition.

The company, which has Northern California roots, is also working with the San Francisco Museum of Modern Art to bring the archives to life through a series of participatory programs in 2022.

WHY IT’S HOT: The North Face knows it does more than sell jackets – it helps create outdoor adventures. The digital repository will encompass stories of its audience, from high-profile outdoor sports celebrities to brand fans who aren’t well-known names. For the company’s content marketers, that archive will be a treasure trove for years to come.

Kudos to The North Face for not keeping those stories buried in an online archive. Creating an in-person content experience with a museum gives the company another way to take its story to an audience. It’s a great reminder that partners who have similar interests and audiences can help amplify great content.

A new user-generated #content campaign from @thenorthface shows that the company does more than sell jackets – it helps create outdoor adventures via @CMIContent. Click To Tweet

Whether you’re planning a trip to Salla, grabbing your North Face jacket to head to the slopes, or heading someplace where you can put your toes in the warm sand, check out the new content hub on Lonely Planet before you go.

HealthHub, a content partnership between Red Ventures brands Lonely Planet and Healthline Media, calls itself a “home base for travelers looking to explore the world with confidence.”

The microsite includes sections for COVID-19 news and pandemic travel planning. Each destination travel guide encompasses current rules around testing, mask mandates, and other restrictions. It also offers general health advice for travelers, from travel health insurance to what to do if you get sick on the road.

WHY IT’S HOT: HealthHub makes sense in an age when travelers (and potential travelers) need to know the most current information, which can change day-to-day. But it’s also a great example of how two brands under the same corporate umbrella can combine content to create a more holistic and helpful experience for their audiences.

HANDPICKED RELATED CONTENT: 3 Content Marketing Examples That Surprise and Delight (Plus Our Hot Takes)
Intrigued, puzzled, or surprised by an example, news, or something else hot in content marketing? Share it with us by completing this form. Your submission may be featured in an upcoming Hot Take.

How To Write an Inspiring Content Marketing Mission Statement [Examples]