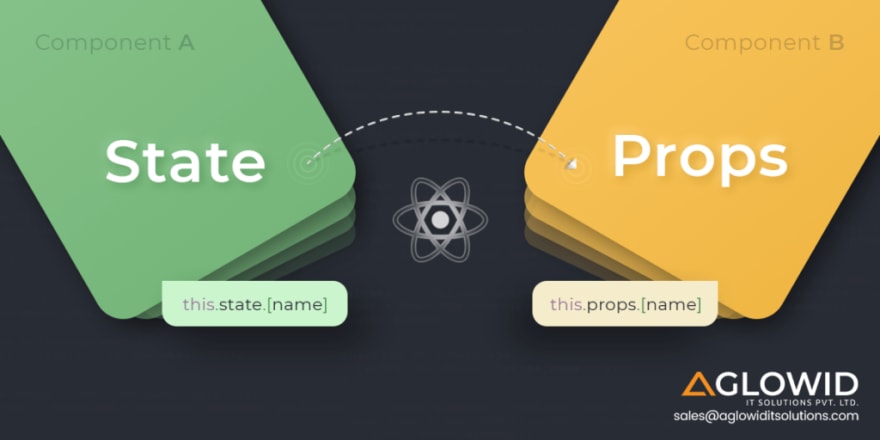 You need to familiarize yourself with many different React elements to develop outstanding React web applications. Props and State are at the core of React development. Most developers often confuse the two terms and their functionalities. Here is a detailed comparison between React State vs Props for all you need to know:

React is one of the most popular web app frameworks globally for creating appealing and robust modern web apps for businesses. Since it is an open-source JavaScript-based framework, many developers are also drawn toward learning React.

Even though the learning curve with React is comparatively lower than most frameworks, some essential React concepts even seasoned React developers need help with at times. Two important concepts essential to React development are React Props vs. the React State. Many developers confuse the two or use the terms interchangeably, which is incorrect. They work together to achieve many benefits for React development. However, they are fundamentally different concepts. Before we understand the differences between React Props and State , we should understand these concepts individually first:

What are Props in React?

Let us understand how props work step by step:

1. Sending props to a component

Adding a “brand” attribute to the Bike element:

2. The component will receive the argument as a props object

Add the brand attribute in the component:

3.1 Passing data as a string from one component to another

Pass the “brand” property from the Garage component to the Car component:

3.2 Passing a variable from one component to another

3.3 Passing an Object from one component to another

Create an Object named carInfo and send it to the Car component:

What are State in React?

A state is an updatable structure containing information or data about a dynamic component, where the information can change over time. Anytime the data inside these components are changed, State re-render the app to reflect these changes. Generally, these changes in data happen due to user-triggered events on the frontend. State can be considered the heart of React components as it determines the component’s behavior and its rendering method. It can also be thought of as representing the component’s local State or information. State can be accessed or modified only on the inside or directly by component.

For setting the State, it is needed to call the super() method in the constructor. This is because of this. The State doesn’t get initialized before calling the super()method.

State is different from props as the value of the component state can be changed. We can use setState() method and pass a new state object as an argument. According to React.js official docs, When we change the value of a State object, the component re-renders after which the output gets updated with the new values.

Stateful components may or may not include props but definitely will have State. They have their State that can be changed at any time. Whenever the component changes State, it will re-render to reflect the React web app changes. Such components are helpful when your apps need to respond to user interactions and inputs. This enables React apps to have a dynamic UI with the help of client-server communication, allowing React developers to create dynamic and interactive React pages.

When to use Stateful Components

When to use Stateless Components

Can I use State in all components?

Props can be empty, although State need an initial value

You can use constructor(): for class components

For functional components, we can set the initial value using React Hook useState():

Here changeMood is a method for developers to update the mood’s state. This component can get the initial state from the parent component. For props we can pass an empty value since they don’t need an initial value.

A major limitation to props is that they are immutable. As discussed earlier, Props are read-only elements for which a component cannot set a new value. React has pure components that don’t alter their inputs or outputs and always display the same result for the same props. If you try changing the value of a prop, it will throw back a TypeError, and that code won’t work:

Props are meant to only pass information from one component to the other. Components can’t change their props, but they are still responsible for the props of their child components in the component tree.

State, on the other hand, React state are mutable. Stateful components change each time user makes any form of interaction with the app. Also, state components are responsible only for managing their State and have no influence on the child components. Each stateful component is private.

React State vs Props – Use Cases

Now that we understand the basic differences between React state vs Props , we should also understand their use cases and where using props is better suited than state and vice versa:

When to use Props

When to use State

These are all the essential differences between React Props and the State you need to know to use React components efficiently in your next React project. Make sure to understand the nature, purpose, possibilities, and limitations of both and use them to best suit your specific requirements.

Do you have a unique app Idea? & you’re Looking to Hire a Developer?