Twitter’s trying out a new way to mend bridges with development partners via a new integration that will promote third-party tools in the app when users undertake specific actions. 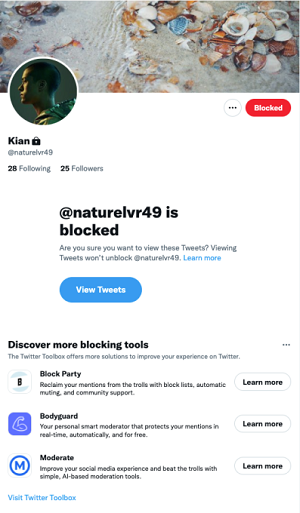 As you can see in this example, Twitter has launched a new initiative which will see it promote third-party tools, built via its developer platform, when users, for example, block somebody in the app.

As reported by TechCrunch

“When Twitter users block or mute someone using Twitter’s built-in tools via the web app, they’ll see a new, non-intrusive prompt that suggests various third-party services that are capable of providing more advanced levels of safety and protection.”

The listed tools are being developed through the Twitter Toolbox, which it launched in February, which is essentially a showcase of reliable Twitter analytics and creation tools developed by third-party providers.

Put the NEW Twitter Toolbox to work for you. These ready-to-use tools are low-cost and built by our developer community to help you get even more out of Twitter.

The idea is that by helping to promote these partner apps, that will generate more goodwill between Twitter and dev partners, because over time, Twitter has flip-flopped on its rules for developers, which has left many in the lurch, and caused many great apps to shut down because Twitter would no longer support their connection to the platform’s data banks (RIP Topsy).

Third party apps can provide great functionality, and it makes sense for Twitter to facilitate these tools in certain cases – though it still seems to me like Twitter could also make more money out of its own apps by incorporating the best functions of third party tools into its native applications and features instead.

Earlier this year,  I noted that if Twitter really wanted to make money out of subscriptions – ala Twitter Blue – then it might be better off targeting business users, by creating a package of improved, native Twitter analytics tools and scheduling features, essentially building on TweetDeck, which it could make available for a monthly fee.

Twitter scaled back its analytics tools in 2020, with the removal of its Audience Insights element, and it hasn’t added any alternative data options since, while it’s also working on a new version of TweetDeck. Providing more in-depth analytics options for tweets would be of value, especially as the data would be coming direct from Twitter itself, as opposed to being filtered through a third-party tool, and given the various Twitter tools and apps on the market, it seems like Twitter itself could incorporate these into a singular business tool, which people would pay to access, and are much more likely to subscribe to than regular users are to pay for custom icons and color options, etc.

I mean, businesses pay for subscriptions to third party Twitter tools already – why not take the best of those and create a native Twitter app?

I guess, the other side of that is that users want alternatives, and if Twitter wants to see the usage of its platform advance, it’s worth working with developers to facilitate such, which could also lead to the creation of new tools that can fuel additional use cases and value.

But it still seems like a missed opportunity. Twitter’s coming version of TweetDeck seems likely to be launched as a paid option, but the features that Twitter’s currently testing don’t really add enough to make it worth paying for, at least from what we’ve seen.

Regardless, this new experiment will ideally provide more incentive for developers to continue iterating on Twitter’s platform, and developing new tools that Twitter will look to recommend in certain aspects.

It’ll be interesting to see whether that also leads to Twitter expanding on its current Toolbox partnerships, and what types of apps Twitter ends up recommending, and where, via these prompts.