When dealing with a local database in ColdFusion, the levels of abstraction and the separations of concern feel somewhat second nature. Yes, I’ve wrestled with some irrational guilt over returning Query objects from my DAL (Data Access Layer); but, on balance, I love the query object’s simplicity and power; and, returning it from the DAL makes life easy. Lately, however, I’ve had to start consuming some remote APIs (microservices). And, when it comes to making HTTP calls, the separation of concerns is less clear in my head – it seems that so much more can go wrong when consuming a remote API. To help me think through the responsibilities of each layer, I wanted to look at consuming the Datamuse API in ColdFusion.

ASIDE: Datamuse is a word-finding API for developers. It’s what I used to build the Angular HTTP client for BigSexy Poems, a poem authoring application that automatically counts syllables and facilitates the selection of rhymes and synonyms.

Before we look at my attempt at a remote API implementation, I wanted to reflect on the characteristics of a database-driven data access layer (DAL). It is not lost on me that I am communicating with the database over a remote network call; so, I am sure that a lot of my confusion is strictly emotional. As such, I want to look at the ergonomics of the database DAL and figure out how to make the HTTP DAL provide a similar experience.

When I started to think about the remote API data access layer, my first instinct was to make it very general. But, as I started to flesh-out that concept, I realized that I was doing little more than reinventing the CFHttp tag. This was causing the HTTP semantics to leak too much into the higher layers of the application.

For example, I was having to pass arguments like method="GET" into the data access layer. But, that’s exactly the sort of thing that the DAL should be encapsulating.

That said, we are ultimately making HTTP calls. And there’s a wide range of HTTP responses that have semantic meaning in the context of a remote API. As such, I think the HTTP semantics will necessarily “leak” a bit into the layer above the DAL. But, we want to limit this leakage as much as we can; and, hopefully, only expose information that the service layer can actually make use of.

After shifting information back-and-forth between the layers, the standard data structure that I eventually landed on looks like this:

Yes, this does include HTTP-related information in addition to the actual data payload. But, hopefully, this is the bare-minimum that the “service layer” needs in order to know how to properly handle the response.

The role of the data access layer then becomes how to translate inputs into API calls into this standard data structure. For this exploration, I’ve created two data access methods:

These are the two types of API calls that I make in BigSexy Poems; so, I have some familiarity with how they work. And, as you will see below, translating inputs into HTTP requests has a bit of a learning curve in the Datamuse API. That said, both of these methods ultimately turn around and invoke the private method – makeRequest() – which makes the actual HTTP call and constructs the standardized data structure for the gateway response:

For the most part, the internal makeRequest() method is a translation layer, taking inputs and returning outputs. But, it does use a heavy-hand in some cases: when the network call failed or when the JSON response is invalid. In these two cases, it throws an error because it knows that the response cannot possibly be correct, nor can it be inspected in a meaningful way.

I didn’t want to build too much logic into the “gateway” layer because the layer above it (the “service” layer) will almost certainly have a lot of business logic in it as well. And, I didn’t want to start spreading related logic across two layers. This is why the gateway needs to return the HTTP status code along with the data – the service layer will understand how to process non-success status codes.

In the next layer up – the “service” layer – I expose the same two methods:

… though, these ones have a much simpler signature since they are even more opinionated than the “gateway” layer methods. And, like the gateway layer, the service layer is also a translation layer; but, the translation responsibilities are slightly different. The service layer must normalize data and wrap API errors in application / domain errors.

That said, if the underlying API returns data that the service layer doesn’t understand, it will throw an error. But, it will be of a type that the next layer up (the “workflow” layer) might handle in some way (ex, logging).

Consuming the Datamuse API then just requires a little dependency-injection and we’re good to go:

And, when we run this ColdFusion code, we get the following output: 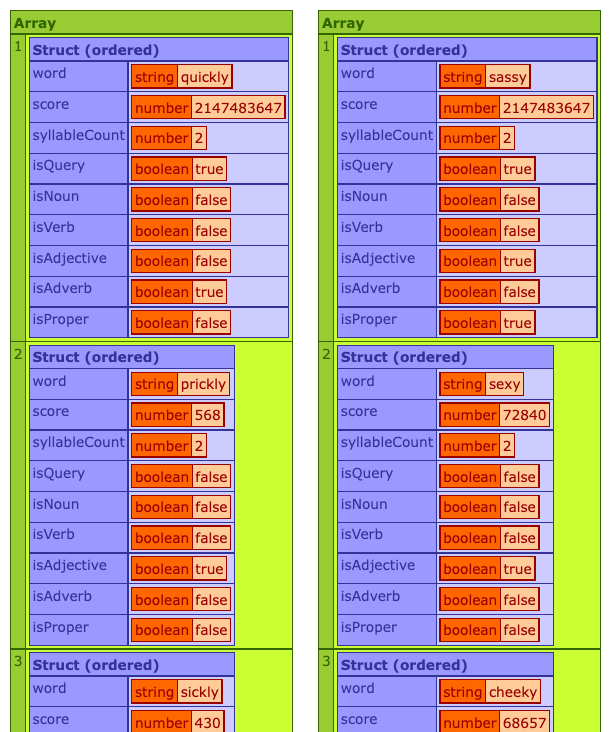 To be clear, this is all very much a work in progress for me! And, the details will change from remote API to remote API since the layers involved here are opinionated, not generic. For example, in my current makeRequest() method, there is no option to pass-in the HTTP Method – GET is hard-coded because that’s the only method that the Datamuse API allows for. The goal of the “gateway” layer isn’t to solve for all remote APIs – it’s to solve for a very specific remote API.

In my exploration, I’m simply looking for a 429 status code in order to “handle” rate limiting. But, I’m not convinced that this is the correct approach.

Figuring out which aspects of the code have which responsibilities is a big part of what makes programming challenging. Failure to draw those boundaries well is what creates a “big ball of mud” that becomes increasingly hard to maintain over time. When it comes to database interactions, I feel like I have developed good instincts. But, when it comes to remote APIs, I still very much feel like a novice. Taking time to reflect on the separation of concerns surrounding a remote API call is a good step; but, I know it’s only an early step in my evolution as a ColdFusion developer.

I’d be very curious to hear how other developers handle remote calls – and what balance they strike between their layers of abstraction.


You Might Also Enjoy Some of My Other Posts